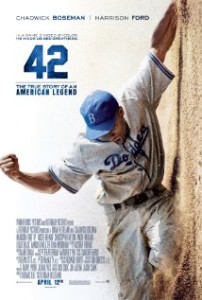 I confess I’m not a big fan of baseball, but then again I’m not a fan of racism either. Because of the latter this movie worked for me. 42 is about Jackie Robinson the first black man to play major league baseball. The story of how America ended slavery, and the war for racial equality covers many years, has many players, and Jackie is one of them.

Post World War II 1946 in America was so drastically different than today that watching the naked hatred and bigotry seemed harsh and unreal. In an early scene Jackie’s new bride leaves California and experiences discrimination in the form of a “Whites Only” public bathroom. In an act of willful defiance she ignores protocol and marches into the facilities, only to have a white airline employee exact a painful punishment. We soon learn the fight for civil rights will be long fought with success measured in inches not miles.

42 is a feel-good movie that will leave you loving the USA, freedom, justice and apple pie, even if, like me, you had little to do with the outcome. Rated PG-13 for thematic elements including language. [rating=3]