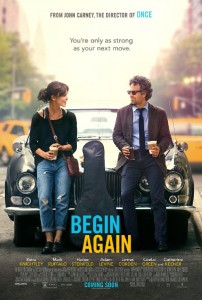 My constant struggle in talking about movies is giving enough information to encourage viewing, while not spoiling the fun bits that are so much more enjoyable when you don’t know they’re coming. The trailer for this movie gives away some good moments, but not all of them, so if you see it fine, if you don’t see it, that’s even better.

Unfortunately it’s insufficient to say “Please go see this movie,” and leave it at that. You will want to know more. OK, then how about this? It’s not a romantic comedy. Even though it stars Keira Knightley and Mark Ruffalo, it’s not about an odd couple that’s winds up together at the end, because they don’t, and I already said it’s not that kind of movie.

Now you ask “Well, what is it about?” Great question, weird person talking to your computer. It’s about many things including friendship, love, loyalty, writing, and producing music. It’s also about betrayal, forgiveness, and using music to express your deepest feelings, and how music can ultimately change people.

Ok, now I’ve probably said too much. I give it four stars out of five. I may put it on my Christmas list. How’s that?