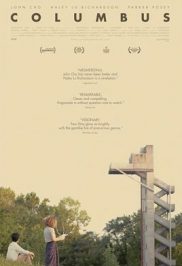 If you find architecture boring and character-driven movies slow, then you should probably skip seeing Columbus. If on the other hand, you are interested in a well-constructed drama with top-notch acting and beautiful visuals, then you should hurry to the theatre before it is gone.

Jin, played by John Cho, is called to Columbus Indiana where his famous architect father has fallen ill. While stuck in the limbo of waiting for his sick father to recover he meets Casey, Haley Lu Richardson, an architectural enthusiast with her own parental dilemma. Columbus Indiana is famous for its modern architecture and its stunning buildings provide backdrops for Jin and Casey as they discuss their very different life situations.

Columbus is a study of lines and form, of relationships and friendships, of duty and obligations. And while getting to know them and their parents and friends you are drawn to these two people and their effects on each other during a few short weeks.