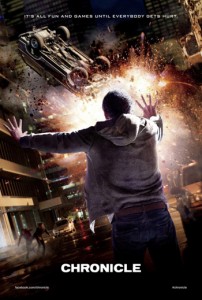 Does power corrupt? According to “Chronicle” the answer is sometimes. Do teenagers engage in reckless and dangerous behavior? The answer is a resounding yes. Is this movie fun and intense? I think it’s both.

Three teenage boys wind up going to a party, descend into a hole in the ground, touch some glowing rocks, and wind up with telekinetic powers. A common story right? It’s happened to us all at least once in our life. What makes this found footage movie unique is their backstory, and slow transition from typical obnoxious teenage boys to heroes and monsters.

I watched this in the theatre and then again at home, and each time it was fun and surprising.