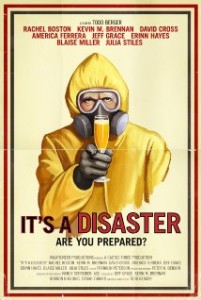 Did you ever have a guest that just would not leave? How about six of them? Now throw in a terrorist attack, some dysfunctional friends, a divorce announcement, a little infidelity and a glockenspiel? Did I mention that it is probably the end of the world? Now you are starting to get the picture. This is a talky drama, that despite the setup, is mostly comical and fun. This should be watched in the safety of your house while wearing your bright yellow has-mat suit. Rated R for language including sexual references, and some drug content. [rating=3]