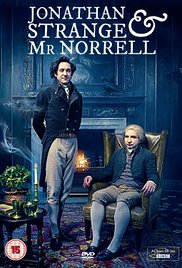 Jonathan Strange & Mr Norrell (now streaming on Netflix) is a TV show based upon the popular novel of the same name by first time author Susanna Clarke. Susanna took 10 years to finish this first novel and won the 2005 Hugo, among other awards. The story takes place in 19th-century England during the Napoleonic Wars. This alternative history finds England after a 300 year magical drought and warring with France. Mr. Norrell is wealthy gentleman who has long been acquiring books on magic and a secret practitioner of the old magical ways. Jonathan Strange is a privileged young man whose primary desire is to convince the woman he loves to marry him.

The story’s main theme is of practical magic being restored to England by two remarkably different men. These differences of temperament and age provide the drama that drives the story. Strange is young and bold and mostly an instinctual magician, whereas Norrell is older and cautious and guided by proprietary.

Even though the relationship between these two men drives the plot forward, the magic envisioned is sufficiently different from other books and movies to keep this story novel and strange and riveting. It took me two shows before I was hooked, but after that I burned through the first season (all 7 episodes) in about a week.