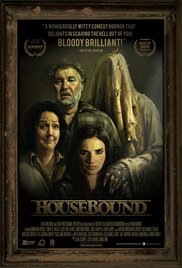 Kylie is an angry, destructive, juvenile delinquent who gets sentenced to house arrest after a botched ATM robbery. She is forced to move back into her childhood home with her mother and stepfather, and to make matters worse the house might be haunted.

Kylie is placed under house arrest with an electronic ankle bracelet enforcing her confinement. This turns out to be every bit of a bad punishment for her mother and stepfather as it is for her. Kylie is the ultimate angry teen who takes her pent-up anger out on every adult she meets which includes her parents, counselor, and the police.

The primary comedy comes from the interactions between Kylie and her dippy blabber-mouthed mother. Where Kylie is street smart and all-knowing, her mother is simple-minded and superstitious. This New Zealand-based movie is part dry comedy, part thriller, and all fun. [rating=3]

Not rated, but would probably be rated PG-13 in the US.