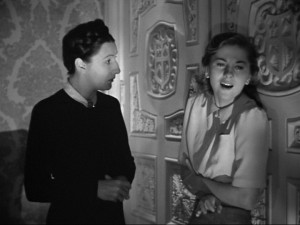 Rebecca (1940) Directed by Alfred Hitchcock, staring Laurence Olivier and Joan Fontaine. Have you every been haunted by a ghost? How about an idea? Have you ever lived in the shadow of someone bigger than life? True to the concept the poor mousy bride in this story is never named. She is just referred to as “Mrs. de Winter. The titular character refers to the late Mrs. de Winter whose past is too grand and sophisticated for the new young bride to compete with. Also included is a diabolical house servent constantly whispering evil thoughts in her ear. Even if you don’t like most old black and white movie, you will probably enjoy this great drama, by one of the worlds greatest director. [rating=4]