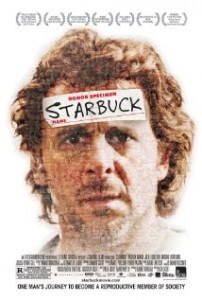 Absurd, funny, and touching. Starbuck is a modern day fairy tale about a man with so many children he didn’t know what to do. And no he didn’t live in a shoe, he lived in Quebec, which is almost as bad. Starbuck is the pseudonym used by the protagonist while donating man-juice to the local fertility clinic for extra money. In a weird turn of events Starbuck needed a lot of cash, and his many donations resulted in numerous offspring. Many are surprised by the requirements and stressfulness of parenthood, and some by the eventual timing, but Starbuck’s story is more reminiscent of a mugging. His progeny are united, organized, craving some basic answers, and surprisingly litigious. A light little comedy that earns it laughs and tears without being manipulative.