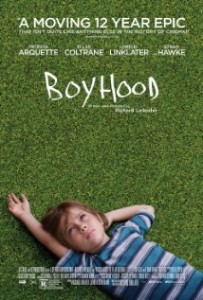 The critics all loved Boyhood, and for once they’re not wrong. The director Richard Linklater took 12 years to make a movie that has the look and feel of a documentary, but is very much a work of fiction. It feels like non-fiction because it contains much drama, but very little plot. At almost three hours running time it was a little long, but worth the effort.

Linklater’s experiment involved taking a six year old male actor and filming him until the age of 18 in a series of slices of life scenes. He then edited them together into a feature length film with the essence of real life. His parents are played by veteran actors Patricia Arquette and Ethan Hawke, who ground the film with believable and lovable, if not flawed, characters.

I first saw Boyhood in the theatre and was pleased with it, but also a little underwhelmed by the lack of narrative. After my second viewing I realized this lack of plotting was by design and very much Linklater’s intention. While we might review our life history, and in hindsight discover purpose and themes, we will mostly recall a few great stories that are not easy to quantify and graph into a coherent whole. Most story tellers tend to “draw their curves and then plot their data,” but Linklater throws it all on the screen and lets the observers come to their own conclusions.

Rated R for language including sexual references, and for teen drug and alcohol use. [rating=4]