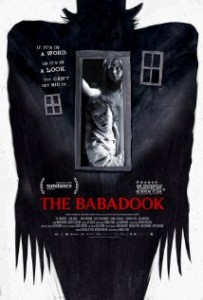 If  Dr. Seuss and Edgar Allan Poe combined forces to publish a children’s book it would be The Babadook. A fiendishly clever pop-up book in all black and white that tells of a dark force called Mister Babadook that won’t leave after entering your house. This book appears among the stacks of bedtime books and is accidentaly read by the mother. The mother and son never make it through the first reading when little Samuel is scared half-to-death and starts the horror story that is a young child too scared to sleep.

Only parents can really appreciate the torture that is sleep deprivation caused by your dearest child. The rest of the film’s torture devices are equally grounded in the mundane horror that I call parenting. Amelia, the mother, sleepwalks her way through a fog of depression and grief while trying to raise her precocious seven year old. The story ends in a satisfying yet therapeutic conclusion.

The Babadook is technically a horror film built on the most ordinary circumstances. If you are the sensitive type and easily frighten, then please take a pass on this little gem. But if you are willing to endure a few chills and frights you will find a cautionary tale about the risks of a heartbreak not grieved. [rating=4]