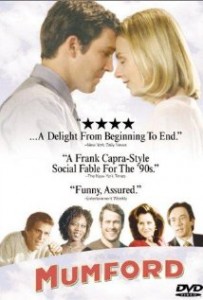 A long time ago in a town not so far away there lived an unusual man. This man was a great listener and if you met him you might feel so comfortable you would tell him your troubles. The fact that he was a psychologist and was paid to listen is just a happy coincidence.

Mumford stars Loren Dean, Hope Davis and a young Zooey Deschanel in this unusual tale of a psychologist and an odd little pacific northwest town. The townspeople are surprisingly realistic and likable even if some of their maladies are not.

To say this is an odd movie is a bit of an understatement. It’s odd in a way the word odd does not prepare you. It’s a PG drama with some rated R flashbacks and peppered in the middle with partial robot nudity. This does not mean the robots are partially nude, it means there are disassembled robot parts that are completely nude.

Mumford is written and directed by Lawrence Kasdan who wrote The Empire Strikes Back, Raiders of the lost Ark. Body Heat, The Big Chill and many others. These are movies I love, but not quite as much as Mumford. Mumford is not about psychoanalysis but rather about the profound power of listening. Mumford exemplifies the maxim that all emotional wounds are created in relationships and that’s also the only place they can be healed. [rating=5]