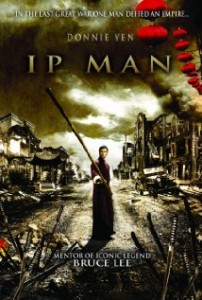 My love of martial arts started with the TV show Kung Fu. I progressed to movies featuring the likes of Bruce Lee, Chuck Norris, Jackie Chan, and the legendary Ralph Macchio. Unfortunately while the fight scenes were compelling, the acting and story telling was usually lacking. The genre was littered with exceptions like “Crouching Tiger, Hidden Dragon”, and “Kung-Fu Panda” but unfortunately they were the exceptions not the rule. The latest addition to this short list is “Ip Man”.

Ip Man is the story of an idle-rich chinese man, who spends his days sipping tea in the garden with his wife and young son, and practicing Wing Chun a form of Kung-Fu. His life is interrupted by the occasional stranger requesting a private duel. Of course the stranger is defeated without IP Man breaking a sweat. These movies always have a core philosophy something like: “To master the craft you must extinguish your fear, anger and other base emotions, and let your actions flow from a place of inner strength and calm.” Ip Man is the pinnacle of calm detachment. His fighting style is such that he seems to be an eye of stillness in a hurricane of motion.

The second part of his life starts with the occupation of China by the invading imperialist Japanese army. Even in the face of poverty and near starvation Ip Man remains polite, calm, and considerate. Luckily for the audience he must use his skills to humble the ruthless and arrogant Japanese and their inferior Karate. I hope you enjoy it as much as I did.