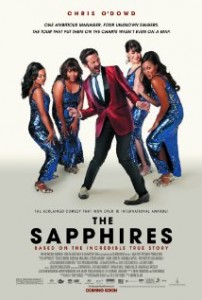 “The Sapphires” tells the true story of four aboriginal girls who formed a singing group and toured Vietnam entertaining the troops during the late 60’s. Australians categorized the dark skinned natives as flora and fauna, and routinely stole the lighter skinned children and placed them with white families. That is the backdrop against which this lighter tale of fame and fortune is painted upon.

Gail, Julie, Cynthia, and Kay are four cousins that start their musical career singing to their fellow settlement members on the back of an old flatbed truck. In their late teens they enter a local talent contest where they become acquainted with Dave Lovelace who becomes their manager and guide. A large amount time is spent singing in Vietnam with flashbacks to fill in their back story.

Their personal and family history is what gives this drama so much heft. Their love of each other and their love of music propel them forward, enabling them to work out their differences, and put to rest the pain of their childhood. These four women grab hold of life and live it to its fullest.

Rated PG-13 for sexuality, a scene of war violence, some language, thematic elements and smoking. [rating=3]